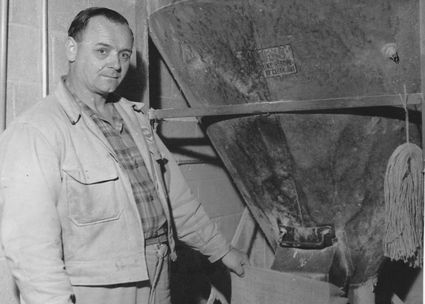 Gordon McBrayne founded the company in 1954

McBrayne's Feeds 'N' Needs Was Established in 1954 by Gord McBrayne 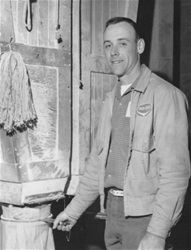 The Dresden Farmers Club was created  in 1919 and according to Gordon McBrayne, the co-operative had about 100 active  farmers that pooled expenses and profits to operate a business that would benefit their business interests.  By the time 1953 arrived there were only 26 active owners. That same year, Gord asked the shareholders if they would sell the business to him. They said no. However in 1954, the co-operative did sell to Gordon and Elma and McBrayne Feed and Supply was born.  (Gord's brother Keith (pictured)  joined the firm as an employee and helped with the mill business. He later would become a minority shareholder.)  In  1954, McBrayne Feed and Supply  began selling Shur-Gain line of feeds and fertilizers, and the new mill offered grinding, rolling and mixing to their list of  services.In 1960, a second warehouse was added, containing 1600 square feet of floor space and storage space for more than 50 tons of feed.In 1962, expanding business necessitated the need for a separate office building.Shur-Gain had a line of fertilizers. As more customers learned of the advantages gained through the use of commercial fertilizer, volumes increased until in 1963, a large fertilizer warehouse was built. It was capable of holding 400 tons of bagged fertilizer and 150 tons of bulk fertilizer. By the next year, a second warehouse was built and designed for the storage of bulk fertilizer with a total storage capacity, now, of 900 tons.In 1972, Hawken Milling Company was purchased by Gordon McBrayne as part of McBrayne Feed and Supply Limited. The business in Wallaceburg continued to operate as Hawken Milling . Later, the business closed in Wallaceburg with customer services coming from McBrayne's in Dresden. The Hawken Milling plant and buildings were demolished in 1987, closing a chapter of history.During the 80's, McBrayne's customer base continued to grow and new shop facilities were built.In 1994, a new pet food warehouse was built.As well, McBrayne's produces it own bird seed, using a special blend of products. Pool Chemicals are also part of McBrayne's product and service list.In September of 1994 McBrayne's Feed and Supply celebrated their 40th Anniversary .As is the case with all business, change was inevitable and constant and there was no exception for McBrayne's Feed and Supply. The management team at McBrayne's remained alert to trends in product and service and responded accordingly. In a blink of an eye ten years passed. Growth remained constant and focused. The customer base was continually loyal and the McBrayne staff could always be depended to go the extra mile for the customer.

In 2004, the 50th Anniversary Celebration at McBrayne Feed and Supply was indeed a glorious occasion.  With founder Gordon McBrayne on hand to relive the birth and growth of his company from 1954 to the half century mark in 2004. And in 2019, McBrayne Feed & Supply celebrated its 65th Anniversary. Today,  McBrayne's Feeds 'N' Needs has seen the torch of ownership and management passed to the second generation of McBrayne's...Allen and Bill.  The two brothers who have worked around the business since their early teenscontinue to honour the tradition of excellence always in customer service, as well in innovation and a business strategy that will allow the company to prosper and grow towards the future.

Stay tuned for what the future holds!